Have you heard of Impian Sarawak?

Sara Loh recounts her memorable experience as an orang bandar immersed in Kampung Sg Rasau in Sibu, working alongside locals to construct a wharf and rebuild two jetties. Her article was featured in aliran.com and can be found in the following link:
http://aliran.com/thinking-allowed-online/2014-ta-online/heard-impian-sarawak/

Three weeks ago, I spent nine days in the idyllic Kampung Sg Rasau, Sibu, on an Impian Sarawak project. What am I talking about?
Disclaimer: Impian Sarawak is a public-funded initiative by DAP to bring orang bandar from Semenanjung Malaysia to Sarawak to contribute to fundamental infrastructure projects and to experience for themselves life on the other side of Malaysia.
These experiences have taken a back seat in the light of major issues faced in Malaysia, ie. the MH370 mystery, the reversal of Anwar’s acquittal, the haze, the Kajang by-election. Nevertheless, friends and family have encouraged me to share my Impian Sarawak experiences with a wider network because we could all use a little more hope.
We occasionally hear about the political situation in Sarawak, especially following the recent retirement of Taib as the Menteri Besar, but how many of us have experienced first-hand the living conditions in Sarawak? I definitely had not. And so, I write this at the risk of romanticising this small kampung in Sarawak. 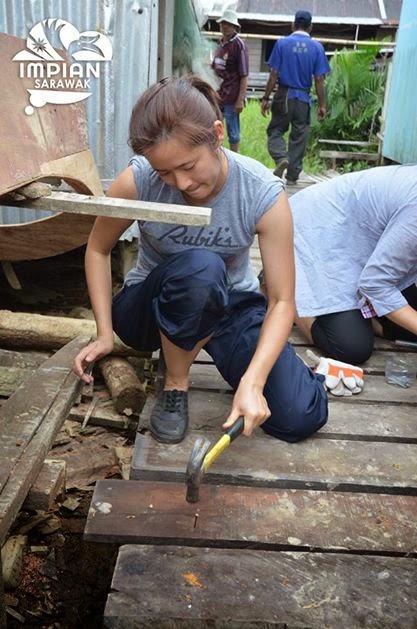 Sara Loh is a recent graduate of Smith College, a women’s college in the US. She is curious about the pockets where media, politics, the arts and society intersect.